Squid Game: The Difference Between Captions and Subtitles - Multilingual Connections
Skip to content 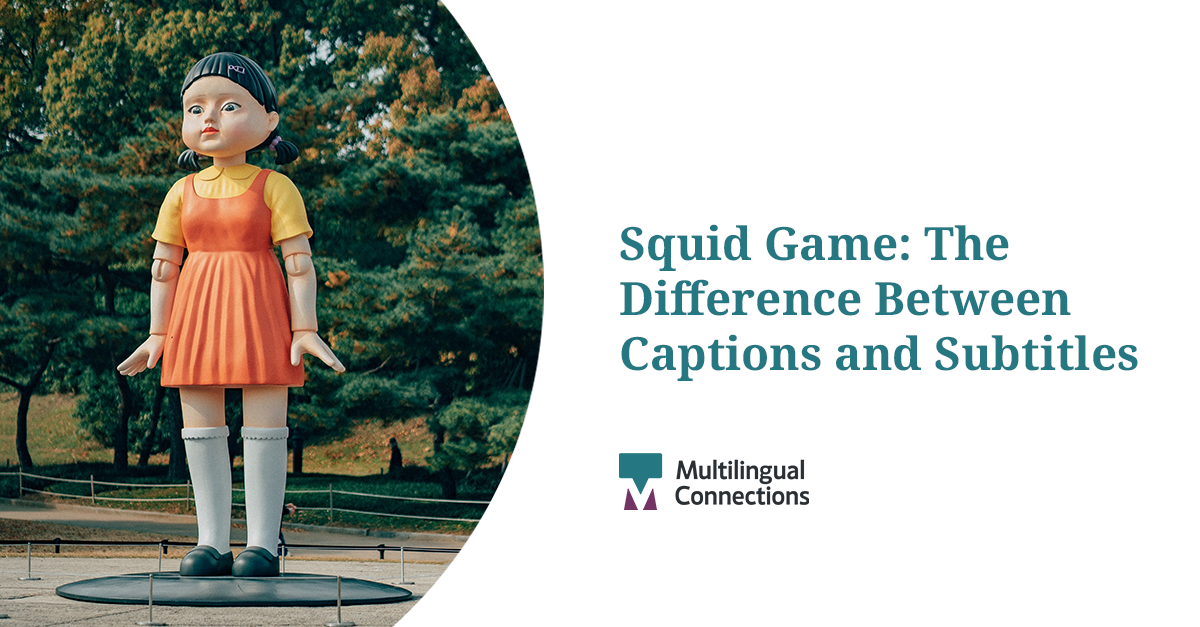 Hwang Dong-hyuk’s South Korean series Squid Game is a global phenomenon, with subtitles in 31 languages. On Netflix, Squid Game is number one in 90 countries and has become the overall most-watched show. Naturally, everyone is talking about the show on social media, and the topic of conversation has, naturally, caught our eye.

The debate has gone viral over Squid Game’s supposedly “botched” translations. This controversy stems from Twitter and TikTok statements by Youngmi Mayer, a Korean American comic and podcast host. Mayer remarked about the English subtitles: “if you don’t understand Korean, you didn’t really watch the same show.”

However, Youngmi mistakenly mentioned subtitles when she was actually referring to closed captions. This misunderstanding begs the question, what’s the difference between closed captions and subtitles? Which is better? What gets lost in translation? Why?

Challenges of Closed Captions vs. Subtitles

Closed captions and subtitles are visual aids helping multilingual audiences understand the dialogue, but they serve two different purposes. Understanding this distinction will give you a fuller experience of watching foreign-language shows and films:

Subtitles are a text alternative for the spoken dialogue of characters and narrators in a video, they aim to make content as enjoyable and relatable as possible for international audiences.

Nevertheless, subtitle translators work within strict parameters. There are limits to how much text people can read while actors say corresponding lines. And translated text cannot take up too much screen space. Translators are forced to shorten subtitles to align with speech and save time to watch scenes without getting lost.

Within subtitles, it is unrealistic to expect complete cultural context behind references and sayings. Supplementing foreign-language content with extensive background information would be educational. But it would interrupt storytelling and immersion.

An overcomplicated viewing experience would alienate casual viewers. So instead, translators interpret humor and nuanced language in a way that’s relatable and natural, while preserving general meaning.

Dubbing has its own challenges. Translated dialogue must convey a similar meaning in the same amount of time as the original dialogue. Plus, dubbed words should synchronize with original actors’ mouth movements, delivery, and gestures. This causes more differences between the original script and dubbing translations.

Also, closed captions are typically auto-generated from dubbed audio. So the limitations of dubbing translation and closed captioning compound into a simplified version of the dialogue. For the most accurate translations, always select subtitles.

These examples from multilingual titles illustrate subtitle and caption complexities:

Did Netflix Translators Do a Good Job on Squid Game?

Experts weigh in with professional opinions about Squid Game’s translations:

Euijin Seo, the creator of the Korean language course goodjobkorean, lives in Seongnam, South Korea. He disagrees with calling the subtitles ‘bad.’ Seo explains that “the creators just made the subtitles that way for easier understanding.”

Edward Hong voice acted for multiple Squid Game characters, including Kim Si-Hyun’s. He commends the “excellent” collaborative work of actors, “ADR director, the audio engineer, and the translator” to pull off the “magic trick” of dubbing.

Keisha Karina worked for Netflix on Squid Game’s English-to-Indonesian translations. The translator responded to Youngmi Mayer’s social media criticism: “We have this…  ‘reading speed limit’… we can only use a certain amount of characters… Thus in lots of subtitle[s], we have to ‘paraphrase’ the dialogue, so the translation fits.”

In fact, Netflix permits two lines or 42 characters per subtitle. Each subtitle stays on-screen for up to seven seconds. This is not due to cultural ignorance. It makes the show accessible to international and hearing-impaired audiences.

Translation: An undervalued art, not an exact science

Language and entertainment are inherently subjective. Beyond cultural context, everyone has unique perspectives and interpretations. One could argue that no two people ever truly ‘watch the same show.’ But translators still do their best to make international titles available to everyone.

Parasite director Bong Joon Ho once mused that “once you overcome the one-inch-tall barrier of subtitles, you will be introduced to so many more amazing films.” And that is the foremost takeaway of the Squid Game conversation.

People are enjoying international and foreign-language media more than ever. No one will come away with the exact same experience. Yet, people all over the world connect through these beloved titles and the ability to discuss them online.

4 Things to Know about Multilingual Voiceover and Subtitling

When Orange is the New Black: How Multilingual Connections Delivers Transcreation

Beyond English: Your Brand in Translation