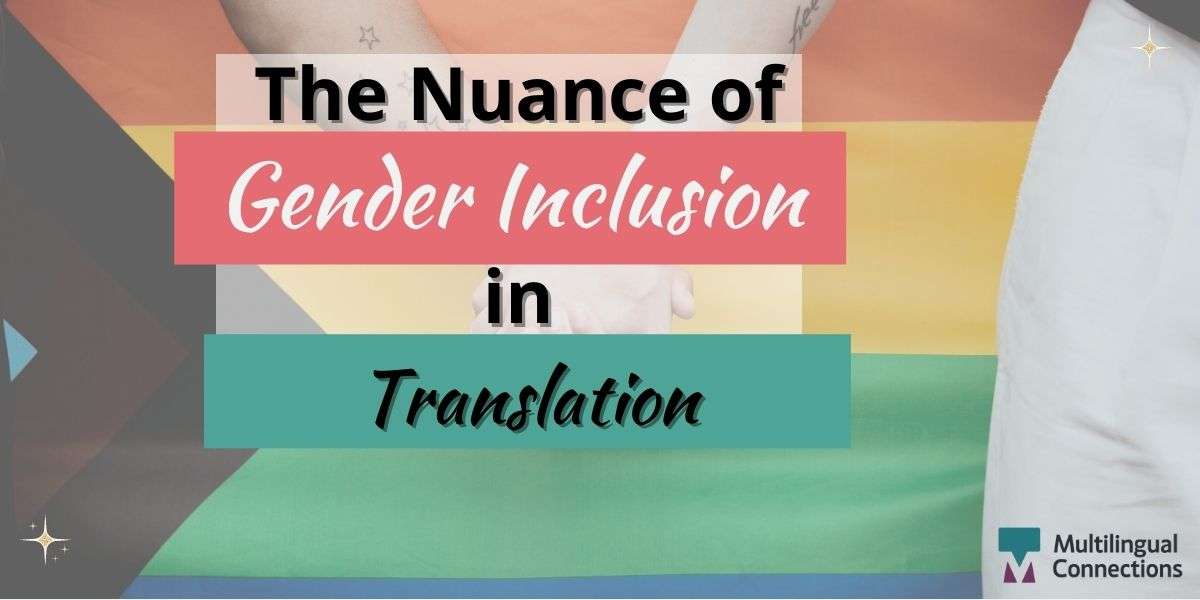 You’re almost ready to post a job description for a new role at your global company. You want to make sure it’s gender-neutral so that all candidates feel welcome to apply. In English, this isn’t so difficult: you would likely use “they” or “the candidate” to be inclusive.

Gender neutral pronouns like “they” don’t exist in all languages, however – or if they do, they’re not all widely accepted. To make things even trickier, words like “candidate” are gendered in some languages, making neutral forms impossible or in need of workarounds.

As you can imagine, translating for gender neutrality can be a thorny issue. Let’s take a deep dive into the nuance of gender inclusiveness in translation to understand why it’s complicated and how linguists approach it.

For many companies worldwide, inclusivity is a core value that they want to nurture among their employees and customers. Whether a job description, a marketing message, or a Tweet, having gender neutral language is a priority.

However, achieving gender neutrality in translation isn’t always straightforward, either due to linguistic limitations of the language or the complex nature of human identity. New gender neutral forms may be rejected because people don’t identify with them, or because of the political mindsets surrounding them.

Some gender-inclusive words may also lead to clunky phrasing that may not be ideal for savvy marketing copy. The risk is that a potential customer could get bogged down by language considerations instead of focusing on the overall message. In the world of business translation, this would be an infeasible language solution, even if inclusivity were highly valued.

The political sensitivity of gender neutrality

People may regard gender neutral forms with suspicion, or reject them outright for different political reasons. For some speakers, certain gender neutral forms just don’t describe their identity or don’t feel organic to them. This is the case for some Latinos who want to do away with the term Latinx because it feels imposed on them by academics (however well-intentioned).

Some French speakers also feel this way about the gender-nonspecific “iel” ending, believing it to be exported from America instead of locally concepted and incorporated into the language. Though inclusivity may be important to speakers, many don’t want outsiders or non-representative groups telling them what terms they should use to describe their nuanced identities.

Finally, language imposition is also problematic when it covers up other more fundamental issues. Some speakers reject inclusive forms because they’re considered superficial gestures to promote inclusivity on the surface while not addressing deeper structural inequalities.

Examples of gender neutrality in practice

To showcase how gender neutrality works in diverse languages, here are some examples of what certain languages can and can’t do today.

English is an example of a relatively inclusive language, as it has some gender neutral pronouns (like “they”) and mostly genderless nouns (doctor, secretary, etc.). In addition, gendered nouns (stewardess, fireman, etc.) have largely been changed to become more inclusive (flight attendant, firefighter, etc.).

Turkish is another good example of a relatively inclusive language, as it doesn’t usually indicate whether the speaker is male or female. Like English, nouns like doctor (“doktor”) and secretary (“sekreter”) are already gender neutral, too.

Other languages may have a default masculine form. For example, in Arabic and Spanish, a group of women and men are described using the masculine form (“هم” in Arabic and “-os” in Spanish). In fact, you might have noticed the problem of gender bias when using a machine translation tool like Google Translate!

As you can imagine, this isn’t ideal for certain texts where inclusivity is key. Some businesses work around these masculine-centered forms by adding a note that the text is intended for both women and men. This is a fairly standard practice in Hebrew, for example – though there are new, creative approaches, like this gender neutral mash-up of masculine and feminine endings.

Other language speakers have gone a step further and created inclusive case endings. In Spanish today, some may add “@,” “e,” or “x” as a gender neutral option, such as “niñ@ buen@” (good child), “todes” (everyone), or “lxs amigxs” (the friends). These case endings are becoming more widely accepted, though there is still significant resistance to them.

Arabic also shows how difficult it can be to get around masculine-centered language. Some Arabic speakers are now using the plural form of they and you (“huma” (هما) and “intuma” (انتما)), but these forms may sound antiquated to some ears. Arabic is also incredibly diverse and usage depends on the region/dialect/speaker, as well as political attitudes. For example, given the historically controversial view regarding homosexuality in Islam, no widely-accepted non-binary Arabic pronouns exist.

Type #3: Languages with new forms that aren’t yet widely adapted (or actively rejected)

Languages are constantly evolving, but there are a range of mindsets about new gender neutral forms. In Spanish, for example, the Latinx form is great for some, but rejected by other Spanish speakers who don’t identify as Latino or Latina in the first place – or who reject what to many feels like an artificial creation from the outside. The complex nature of identity plays a role in how widely adopted and socially acceptable these new forms can be.

This is also the case for languages that are inventing new non-binary terms. While Japanese pronouns like he/she/they are hardly used in regular sentences and wouldn’t be a huge issue in texts like a job description, speakers are innovating to express non-binary status by using “X-gender” (Xジェンダー: Ekkus-Jendaa) or “other” (その他: Sonota). These new forms are also sprouting up in languages like Chinese. The term “x也” or “ta” in Mandarin is becoming a mainstream way to express non-binary status.

For linguists who want to translate texts into gender neutral language, these new forms may be a good option. However, it’s also important for the majority of speakers to understand the translated text. When a new form isn’t yet widely adopted, usage may be out of place depending on the context.

Finally, there are languages that haven’t yet adopted new forms. Russian is a good example of a language that doesn’t have a neutral pronoun or a non-binary option. Even more complex, verbs must be conjugated to match gender in Russian. Given these linguistic limitations, gender-neutral language isn’t yet possible in Russian – though some activists are reflecting on this issue and hoping to invent new forms.

Balancing between language’s limitations and ideals

Ultimately, gender neutrality in translation isn’t a straightforward matter. While new forms are becoming widely available in some languages, others aren’t quite there to offer inclusivity.

Often it comes down to a balancing act between what’s possible at this point in time linguistically and what we want to be possible. Though used to working in that “limbo space” of language, it’s important to note that translators can’t bend language in a morally prescriptive way. While gender neutrality is a value that many individuals, groups, businesses or translators hold today, the limitations of language may be very real.

At Multilingual Connections, we partner with our clients to understand what goals they want to accomplish through translation, and when inclusiveness is on the list, we rely on our translator’s expertise to identify the most gender neutral language available that also aligns with the translation’s requirements. Wherever possible, we advocate for a gender-inclusive yet flexible approach that privileges readability so that the text resonates with its target audience. For example, if gender-neutral language makes for cumbersome reading, we work with our translators to modify word choices so it reads naturally, without eliminating inclusivity entirely.

Every language and culture is unique, which is why we offer linguist consulting services for businesses interested in understanding that uniqueness as it relates to their business goals. Language has always been complex, and gender neutrality is no exception. Get in touch with our expert team today to learn how we can overcome your challenges in translation, including gender neutrality.

Beyond English: Your Brand in Translation