What's with all the Poorly Translated Signs? - Multilingual Connections
Skip to content 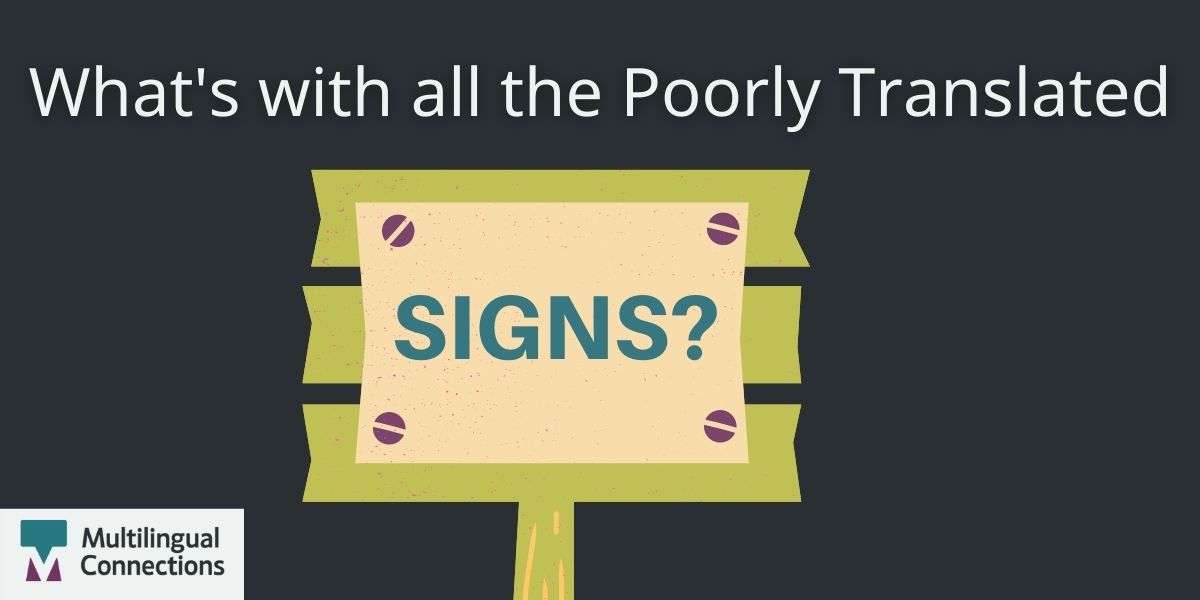 “Pepsi brings your ancestors back from the dead!” just doesn’t have the same ring to it as “Come alive with Pepsi!” Yet somehow Pepsi approved this nonsensical translation for their slogan in China.

This awful translation (and many others we’ve seen across the world) begs the question: what’s with all the poorly translated signage? Though chuckling over badly translated signs has become a rite of passage for travelers, it’s quite embarrassing for the brands who made these mistakes. Worst of all, it’s not just small businesses that fall into this trap, but also big-name multinational companies like Pepsi.

Let’s take a closer look at why poorly translated signage tends to happen in the first place, so your business can avoid becoming the next translation laughingstock.

1. Businesses use a non-professional translator.

Instead of hiring a professional, businesses sometimes try to take a shortcut and assign the translation to an internal employee or a company friend. By choosing a novice, brands get back hyper-literal translations that don’t make sense.

2. The translation was copy-pasted from Google Translate (or another AI).

Machine translation may play a role in some types of content. However, it’s a bad idea for highly visible content, such as signage.

For example, this official Spanish government webpage auto-translated a staff member’s name “Dolores del Campo” as “Pain of field.” As you can see, simply typing a phrase into Google Translate or another AI tool is likely to give you a high level of error.

3. The translator wasn’t given any context about the sign.

Another typical problem comes up when the hired translator isn’t given any context about the sign or what’s on it. While the verb above “gritar” can be translated as “cry” or “shout,” it’s clear from the visual clues that it’s referring to shouting.

This was likely a case of the translator not receiving .jpegs of the sign or any context from the company about how the translation would be used.

4. The translator doesn’t know the specific dialect or have the necessary cultural nuance.

What’s more, professional linguists use their cultural know-how to ensure a top translation. Consider this translation of the “fartfull” workbench from Ikea (which means “full-speed” in Swedish). A linguist with even minimal cultural understanding of a U.S. audience would instantly flag the use of “fartfull” for this product.

In general, unprofessional language agencies assign translators work without considering their cultural backgrounds or dialect specializations. This may have been the problem behind American Airlines’ slogan “Fly in leather,” which was translated as “Vuela en cuero” in Spanish. For some Latin American countries, this was no problem, but in some regions like Mexico the slogan meant “fly naked.”

It’s also important to remember that not all translators specialize in the same content areas. There’s no such thing as a “jack of all trades” linguist, which is why it’s vital for businesses to choose translators with specialization in their area.

Culinary translation, for example, is much more difficult than meets the eye, which is why menu translation is a specialized field. In the example above, the word “mixed” has been translated as “confused” – though this is a relatively mild mistake compared to highly unusual and sometimes lewd culinary translations found worldwide.

Simply consider your favorite dish and you’ll see that foods can be tricky to translate because of the emotional weight behind them. “Spotted Dick” is a famous English pudding, but you can imagine the trouble translators could get themselves into if they translated it literally.

Finally, signs are often badly translated because they lack a final proofreading step. Unlike professional services that include translation, editing and quality control, it’s common for businesses to slap the translation on the product without a second look.

It’s clear that the sign above is selling “lamb” not “lamp,” though it’s not just your local shop that makes this kind of typo. NPR accidentally translated their 2018 headline about the “Year of the Woman” as “El Ano de la Mujer.” Without the tilde symbol (~) over the “n,” this word means “anus” instead of “year.”

If you need to translate a sign or slogan for your brand, opt for professional services. By hiring a first-rate language solutions partner like Multilingual Connections, you can say goodbye to terrible signage for good.
At Multilingual Connections, our team of expert linguists have the language know-how and cultural nuance to translate your signage to resonate with your target audience. Learn more about our industry-leading services and get in touch to kick off your next language project. We can’t wait to connect with you!