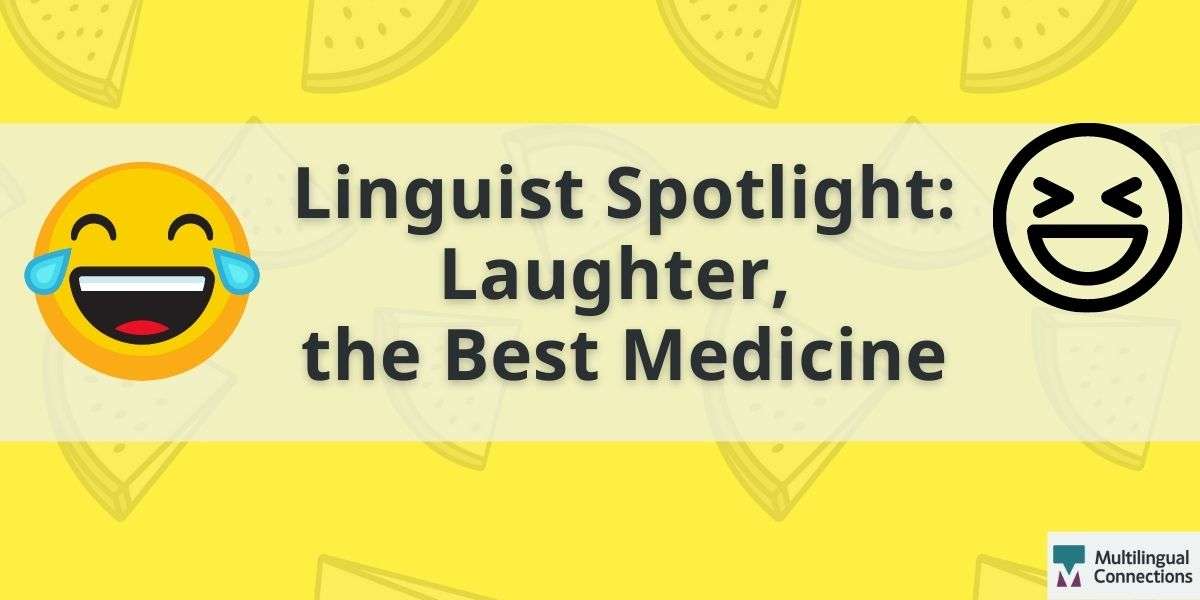 Three of our linguists recount humorous moments in their translation careers.

Alexis has been working with Multilingual Connections since 2018. She has primarily translated and transcribed for the law enforcement industry from English to Spanish and vice versa. Of late, her work has expanded into the educational and medical fields.

Analía has been working with Multilingual Connections since 2014. Her work has mainly consisted of subtitling, transcreation, and other services for law enforcement projects. She primarily translates from English to Spanish.

Stephanie has been working with Multilingual Connections since 2017. She primarily translates from English to German. She enjoys working on medical and technical translations.

Tell us about a time you laughed while doing a translation project. What was funny?

Alexis: I could say that whenever I have the chance to translate for Spanish speakers from my beautiful country of Mexico, I laugh a lot at some phrases that are so rich and peculiar that sometimes make me go back in time and remember the fun times in high school, from pranks to words with double meanings!

There was this one particular job when I was trying to find a gentilic (word that denotes ethnic or national affiliation) for a person from Guanajuato, one of the states in Mexico. I remember it was a Saturday afternoon and I was completely blocked, unable to figure that out at all—so I contacted my translator friends in our chat room to get some help. Not only did I get help, but we ended up joking about different ways to “supposedly” form a gentilic and we came up with “Guanajuatoman,” which was some kind of superhero that somehow sang along to the music of “Rocket Man” by Elton John. I thank my dear friends so much for this moment that gave me the energy to continue doing my best at what I do, full of laughter and good vibes!

Analía: While working on a law enforcement interview a few months ago, the investigator and the interviewee had a pretty hard time understanding each other because the officer thought “niece” meant  “nieta” — granddaughter —  in Spanish. It was particularly funny because never before had I noticed the similarity of those words and their potential to cause confusion.

Stephanie: German borrows heavily from English when it comes to marketing and business terms. A while ago, I had a client who insisted on translating every single English word. The client wanted “market” translated as “supermarket” and “traffic” as “intercourse” (the word is ambiguous in German). It took a lot of delicate convincing to tell them that “achieve your supermarket goal and increase intercourse” is probably not what they wanted to convey to their audience…

What’s the funniest word in your native language? Why?

Alexis: There are words that just sound funny or are too long to be able to pronounce correctly, over all those with a pre-Hispanic influence. I picked the slang word “órale” which is one of my favorite ones because it has so many meanings that it ends up getting everybody confused when you try to explain its connotations. Some of the translations I have used for this word are “I agree with you, “Come on!,” “Bring it on!,” “Yes,” “Hurry up!,” “That’s amazing,” “There you go,” “Okay,” “It’s your turn,” “Go ahead,” “I’m waiting for you,” “Watch it!,” etc.

I guess translation is not only about conveying a meaning correctly, but about transmitting a deeper idea that goes beyond words.

Analía: I can’t think of a funny word, but I have always wondered why cats in Spanish have seven lives but nine in English. Does anyone know why they live longer in the Northern hemisphere?

Stephanie: That really depends on the perspective! The funniest word I use on a regular basis (when I don’t translate, I teach yoga) is “Sitzbeinhöcker”, literally “sitting bone humps.” A very awkward way to say “sit bones” 😉

What about you? What’s the funniest word in your native language? Post it on LinkedIn and tag Multilingual Connections, we look forward to reading them!

Are We There Yet? A Roadmap for Global Research Translation

3 Facts About the Dothraki Language on Game of Thrones