It may be tempting to think of translation as a simple conversion of one language to another. But for those who are inclined to roll up their sleeves and take on the tricky business of translation, there is certainly no shortage of challenges to keep them second-guessing their choices on the page. Different languages contain discrepancies between their methods of constructing meaning,grammar, and sentence structures. While a translation might masquerade as an original text dressed in a fancy new costume, many translators feel that their work can’t be as easily defined.

The fact that translation is so frequently described through metaphor highlights the elusive, artistic spirit at the core of the discipline. We asked our linguists to shed some light on how they conceptualize their craft. 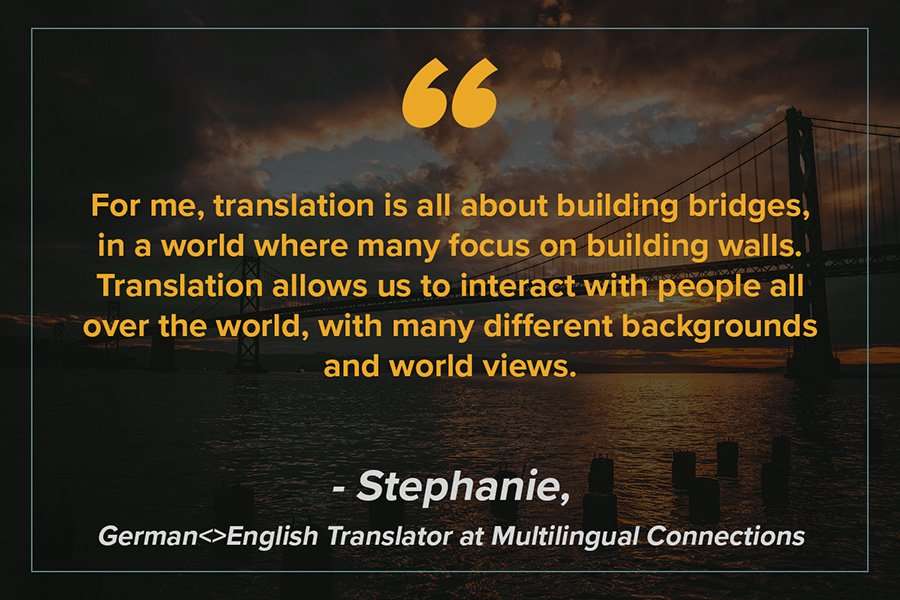 “I imagine that the translation process is akin to a simplified version of the screenwriter-director relationship. The screenwriter and his script, containing fully fleshed-out characters and a detailed setting, depends on the director’s experienced and creative handling—on her keen eye and ear—to adapt his vision to a different medium and bring it to life for that specific audience.”

“Words and language define and shape our perception of our immediate (and remote) reality. As a translator and writer, and lover of legends, lore and certain sci-fi; I feel like a mind traveler of worlds, a word and language shifter striving to make parallel realities perceptible and accessible to the greater public…”

“A translation is not a copy of an original, it is an exegesis of it. Interestingly, many Muslims will distinguish between the Qur’an, i.e. the original Arabic text, and a given translation of it, explaining that they are not one and the same, that the Qur’an itself can only be read in Arabic and any translation is a mere attempt to explain its substance to non-Arabic speakers. But in any translation, much is lost, whether cultural nuance, linguistic subtleties, poetic aesthetic, etc. Hence the translator’s work consists not in conveying the substance as exactly as possible, but as fully as possible. It is as though they are giving a lecture on the original substance, but seeking to make it as fluid as possible, so the reader is blissfully unaware that they are in class.” 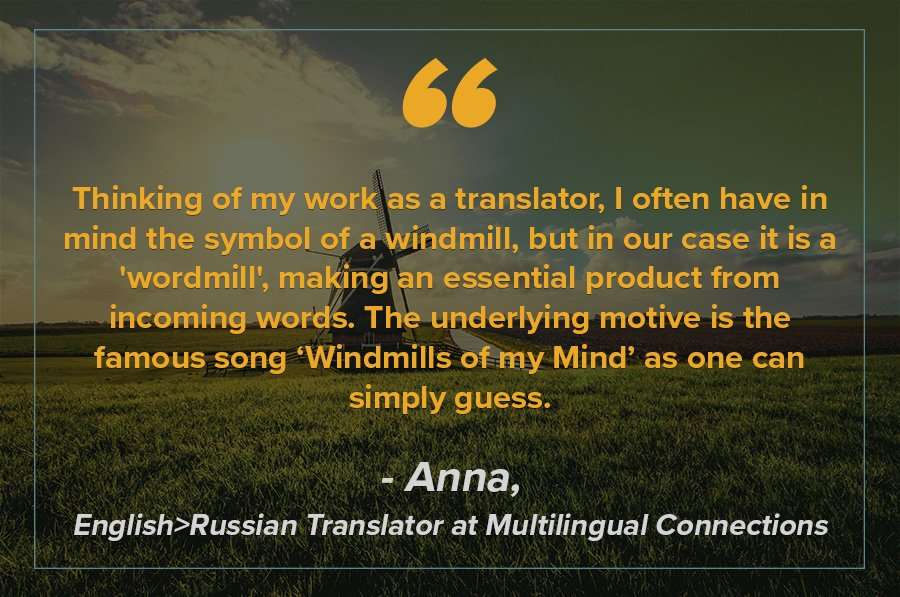 “Translation is one way for me to play with words. Words are not just a tool. I am so in love with Arabic, my mother tongue, that I am sometimes tempted to think that words are an end in themselves, their denotations and connotations; the letters, their resonance, rhythm, even their curves…

As a mom, I remember how I used to look for the nicest and most comfortable outfits for my children. This is how I deal with the writer’s ‘brainchildren’ (in Arabic we call them Thought’s Daughters…feminists will love that!), with utmost care and sensibility.”

“I think of translation as a balancing act. Should the translation be as literal as possible or should it primarily sound idiomatic in the target language? Is it more important to preserve an author’s idiosyncratic style or to convey a message as clearly as possible? The answers to these kinds of questions depend on much more than just the style and content of the source text. The cultural context, purpose, and audience of the target text play an equally important role in tilting the balance one way or another. Balancing the various – often conflicting – demands of translation is both the biggest challenge and the main appeal of the job.” 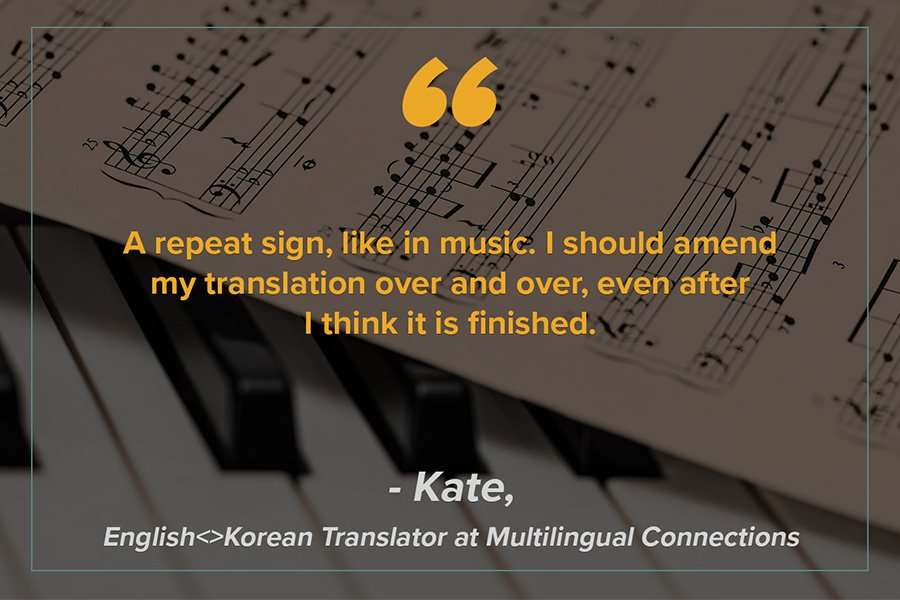 “For me, being a translator is having the responsibility, and even more, an opportunity to learn something new every day. Learn with the language, with each choice we have to take to convey a specific meaning to another public culture, and, of course, learn with the number of different subjects and new content presented to us with every new project, demanding constant study of a multitude of themes.

So, being a translator is like embarking on a challenging and privileged journey, crossing borders and assuming the mission to safeguard and transmit ideas and concepts to different parts of the world. It’s to help to universalize knowledge.”

Just like the image of the Colossus of Rhodes as imagined by the famous painter Martin Heemskerck, I strongly believe that translators must keep a foot on either bank and their mind right in the center to keep alive the flame of understanding between cultures and people.” 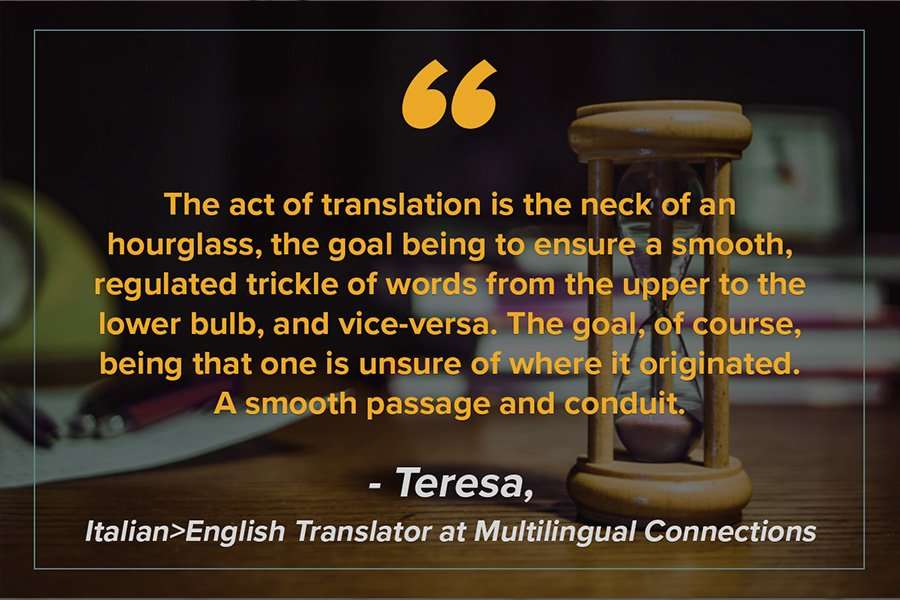 Whatever their perspective, professional linguists must possess a masterful ability to navigate that treacherous middle ground between the source language and the target language. Multilingual Connections employs a network of highly skilled individuals with proven track records of handling the unique and intricate challenges of their respective language pairs.

Contact us today to find out how we can provide multilingual solutions for your business.

Linguist Spotlight: Getting to Know Rema and Takafumi

At Multilingual Connections, we work with hundreds of talented linguists across the globe who are experts at translation, transcription, subtitling, and more. How do we pair each project with the best linguist for the job? We take into consideration their native language, region, and area(s) of expertise to achieve the highest quality of linguistic accuracy …

Linguist Spotlight: Getting to Know Rema and Takafumi Read More »

This month we would like to introduce Mariela, a Team Lead at Multilingual Connections. Mariela joined our team as a Transcription Project Manager with many years of experience in multimedia and translation under her belt. And over the last six years, she has worked on hundreds of creative projects and has contributed immensely to our …

Multilingual Connections is committed to being an inclusive environment and helping global voices be heard. We stand in solidarity with the Black community against systemic racism, oppression and police brutality, and we are committed to amplifying the voices of those who have long been unheard and working to affect positive change in our country and …

At Multilingual Connections, we work with hundreds of talented linguists across the globe who are experts at translation, transcription, subtitling, and more. How do we pair each project with the best linguist for the job? We take into consideration their native language, region, and area(s) of expertise to achieve the highest quality of linguistic accuracy …

“Translation is a Combination of Variety, Novelty, and Challenge” Read More »

How to Record Virtual Calls for Transcription

As a result of the pandemic, many companies have moved their employees from office workspaces to working from home indefinitely. So, instead of hopping into a company conference room for a department meeting or a manager’s office for a one-on-one check-in, team members are now going virtual with their meetings and other workplace needs.

At Multilingual Connections, all of our team members bring their perspective and experience to the process  – both professionally and personally. This month we would like to introduce Osvaldo de la Torre, a Language Quality Manager at Multilingual Connections. Osvaldo joined our team as a Spanish editor and has worked on hundreds of projects over …

Multilingual Connections works with hundreds of talented linguists across the globe who are experts at translation, transcription, subtitling, and more. To reward the linguists who go above and beyond, we recognize one “Linguist of the Month” based on their exceptional quality, reliability, and their general amazingness.

With half our team based in the Chicago area and half global, engaging our remote team has always been top of mind. In late December of last year, we shared a blog about our white elephant gift exchange across eight countries as an example of how we’re working to keep everyone engaged, connected and having …

Anti-Tips for Working from Home

Recently, tons of organizations have been sharing tips for working from home. But, as our team members know, even when we try our hardest to follow even the best advice, we’re still prone to making mistakes along the way. That’s why we put together a list of the best anti-tips for being productive while working …